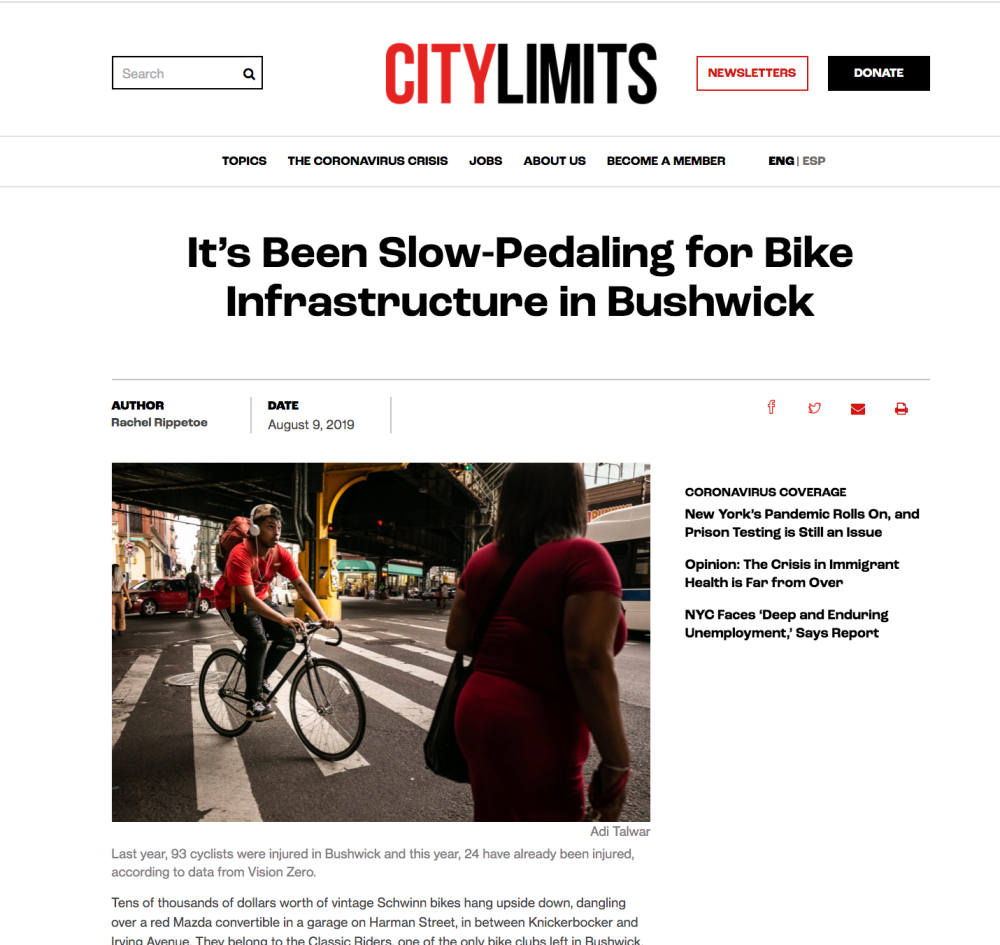 Tens of thousands of dollars worth of vintage Schwinn bikes hang upside down, dangling over a red Mazda convertible in a garage on Harman Street, in between Knickerbocker and Irving Avenue. They belong to the Classic Riders, one of the only bike clubs left in Bushwick.

The neighborhood birthed a citywide trend of bike clubs. The Puerto Rican Schwinn Club started in a garage in Bushwick 35 years ago, as a way for the large population of Puerto Ricans in the neighborhood to feel closer to each other and to the island.

“All the bicyclists landed in this neighborhood,” says Eddie Gonzalez, president of the Classic Riders. “For some reason, we ended up very close to each other.”

Gonzalez, 55, says Schwinn put a factory in Puerto Rico back when he was a boy, and their bikes, which back then might sell for $25 a pop, became ubiquitous around the island. They represented a kind of freedom to the working-class man, allowing him to travel anywhere cheaply.

The clubs serve as a reminder amid gentrification and bougie, white-owned bike shops popping up in Bushwick: Bikes were once a symbol of the working class.

“They were cheaper for us, for the poor man,” Gonzalez says. “They made them so good that they would last forever.”

The Classic Riders rode in Bushwick’s Puerto Rican Parade this year, the neighborhood’s first official one, and they often take trips to Coney Island or the Bronx. But you wouldn’t find them at the cyclist mass “die-in” at Washington Square Park earlier this month, protesting the death of now 17 cyclists this year.

Despite being a staple in Bushwick’s bike culture, the neighborhood’s Schwinn clubs aren’t your traditional bike activists. In fact, Gonzalez and other members harbor the same misgivings about pro-bike policies that one hears from skeptical New Yorkers who never move around on two wheels.

Jorge Bermudez, 33, who joined the Classic Riders when he was just 14, says he doesn’t see the point in the neighborhood investing in more biking infrastructure.

“The city’s gonna spend all this money and it’s not even going to be used,” Bermudez says.

It’s as if the club is teetering on either side of Bushwick’s bike debate. The neighborhood has been in the middle of a tug-of-war between some local leaders and citywide policy.

The city’s Department of Transportation has continually singled out Bushwick as a key neighborhood for growing bike infrastructure, but this often puts it at odds with Community Board 4, which has treated the neighborhood bike projects with hesitation.

As the streets become more crowded, advocates say that Bushwick must decide which stakeholder is more important: drivers who are continually losing parking as the neighborhood gentrifies, or cyclists and pedestrians who often face hazardous conditions.